Every knee shall bow 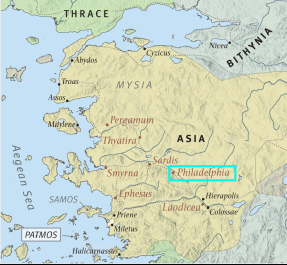 In verse 9 Christ makes a bold promise: One day the members of the “synagogue of Satan” will bow before the members of the church of Philadelphia! The “synagogue of Satan” is a reference to the unbelieving Jews who were leading the persecution of Christians in Philadelphia. They were Jews in the racial, cultural and ceremonial sense, but not spiritually. (See Romans 2:28-29.) But why would they be bowing before the Philadelphian Christians? Was it because of Philadelphians’ might? Clearly no. It had everything to do with the God they worshiped. Bowing before someone’s feet depicted complete defeat and surrender. What Jesus promised the Philadelphians was three-fold: Some of these unbelieving Jews, like Paul, would repent and be saved during their lifetime. Others would be saved during the time of Israel’s national repentance during the Tribulation: “And I will pour upon the house of David, and upon the inhabitants of Jerusalem, the spirit of grace and of supplications: and they shall look upon me whom they have pierced, and they shall mourn for him, as one mourneth for his only son, and shall be in bitterness for him, as one that is in bitterness for his firstborn” (Zechariah 12:10). The rest would bow before them in Heaven. Why? Because in Heaven, right behind the Philadelphians, would be the Lord Jesus Christ Himself, seated upon His throne, and before Him every knee shall bow (Philippians 2:10)!

Our deliverance from God’s wrath is guaranteed

In verse 10 Jesus reminds them of another promise – one extended to all faithful believers throughout all the ages: “I will keep thee from the hour of temptation, which shall come upon all the world, to try them that dwell upon the earth.” This is not merely a promise to give them grace against temptations to sin. This is the temptation (trial) – the Great Tribulation itself, also known as the Time of Jacob’s Trouble. Christ promises to spare us all of God’s wrath, including the Tribulation. Do Christians suffer pain and persecution today? Yes, but that is man’s wrath. That’s nothing compared to God’s wrath. God’s wrath extends beyond this life and beyond the grave. It follows the objects of His wrath into eternity. (See Matthew 10:28). It’s not God’s desire for this to happen to anyone. God is “not willing that any should perish, but that all should come to repentance” (2 Peter 3:9b), and it should not be our desire as believers to wish God’s wrath on anyone. God prefers reconciliation over retribution, but to those who refuse to repent, wrath is the only option left for them. Believers are exempt from this because they have already bowed the knee to the Savior.

Kiss the Son, lest He be angry, and ye perish from the way, when His wrath is kindled but a little. Blessed are all they that put their trust in Him.  (Psalms 2:12)

We must live like every day is our last opportunity

Though, to us, it has seemed a long time in coming, the Lord reminds us: “Behold. I come quickly.” The way this word is used with regard to the Lord’s return is better understood as “suddenly and without warning” as opposed to “soon.” You might compare it to people’s perception of a catastrophic bridge failure. It’s something that happens without warning. Paul likens the Lord’s return to a thief breaking into a home (see 1 Thessalonians 5:2, 4). The thief gives no warning. He just shows up. There is no prophetic event, no great sign that precedes the Lord’s return. It is next on the Lord’s agenda and it will just happen. As it applies to the Philadelphians, this is not a warning of coming judgment on a sinning congregation. It is a promise of final deliverance from trial. In light of this, the Lord gives the Philadelphians words of exhortation similar to those He did to the dying church at Sardis: “Hold fast which thou hast, that no man take thy crown” (v. 11). It is easy to become discouraged when faced with daily pressure because of your stand for Christ. The Christians in John’s day suffered dearly for their faith. Christians around the world today face heavy persecution (that the media does not cover). Jesus’ advice is simple and clear: “Hold on!”

Be faithful! Hold on!

His promise to those who hold on through dire circumstances is peace and stability, the exact opposite of what they face now: “Him that overcometh will I make a pillar in the temple of my God” (v. 12). In other words, their reward will be a reflection of their perseverance. Where they will abide will be a place of continual and uninterrupted peace: “He shall go no more out,” and as they affirmed Christ without shame, God will affirm them: “and I will write upon him the name of the city of my God,” meaning full citizenship in heaven, “…and…my new name,” meaning they will know the fullness of Christ; they will see Him as He is ( 1 John 3:2). Their faith will not be in vain, but fully rewarded. They need only “hold on!”