Living for Christ is not an event. It is a way of life. The church at Philadelphia understood this. Only this church and the church at Smyrna received no rebuke from the Lord – not because they were perfect, but because they were steadfast. These were not perfect Christians. They were faithful and growing ones. 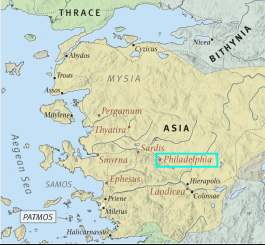 When Christ describes Himself to this church He does not reference the vision in Revelation 1:12-17. Instead, He reaches back to the Old Testament to describe Himself.

He That is Holy

“He that is holy” speaks to His deity and equality with God. Only God is holy (Isaiah 6:3) and it is a quality that Christ claims for Himself without reservation. “He that is holy” is also the messianic title for the Lord in the New Testament. (Mark 12:4; Luke 1:35; John 6:69; Acts 3:14 and others.)

He That is True

“He that is true.” Truth and holiness are used together in Revelation to describe God (6:10; 15:3; 16:7; 19:2, 11). The word translated “truth” is the Greek word alēthinos. It means “that which is genuine, authentic, and real.” The world is constantly clamoring for leaders that are real. You want real? Jesus is as real as it gets!

He That has the Key of David

“He that hath the key of David.” David symbolizes the office of Messiah (Revelation 5:5; 22:16) and keys represent authority. That Jesus possesses the key of David means He has complete control of that office and complete authority over who enters the messianic kingdom. Revelation 1:18 shows us that Jesus has the keys to death and hell, and this passage shows us He holds the keys to heaven. Jesus literally has the power of life and death over all mankind.

“He that openeth, and no man shutteth; and shutteth, and no man openeth,” emphasizes Christ’s omnipotence. What He does cannot be overturned by another, not even the Father because all authority has been given to Him by the Father (Matthew 28:18). As it applies here, no one can shut the doors to the kingdom if Christ holds them open, and no one can force them open once He has shut them. The same is true of the gates of hell. In short, Jesus has absolute sovereign control over all, and over the church in particular.

Why share all this with the church at Philadelphia? To encourage them in their patient endurance: “I know thy works,” Jesus told them. “Because of your perseverance, ‘I have set before thee an open door (both of opportunity, and entrance into the kingdom of Heaven).’ You are small in number (‘hast little strength’), yet you’ve had a huge impact.”

Philadelphia was deep into emperor worship because of the financial aid it had received from Rome following a massive earthquake that had hit the region. Philadelphia was at the epicenter of that quake and for years afterward was subject to aftershocks. In gratitude for the help they had received from Caesar Tiberius, they had erected a large statue (idol) in his honor. Twice they renamed the city after Roman emperors. In Philadelphia it was expected that the citizens worship the emperor. The church at Philadelphia only worshipped Christ. That stand cost them, and the Lord commended them for not denying His name despite the constant pressure to do so.

Philadelphia understood the nature of being Christian

It isn’t just claiming a title or associating oneself with the name of Jesus Christ. Being a Christian is owning a relationship with a living Savior and accepting the consequences. Why “consequences”? Because having a strong relationship with Christ comes at a price. There are things that it restricts you from (1 Peter 4:4). There are friends that you will lose. (See John 6:50-71.) There is suffering you must endure (1 Peter 4:12-14). But there is also great reward (Romans 8:18)! In light of that reward, we must bear our cross, despising the shame and look forward to the joy that is set before us. (See Hebrews 12:2)