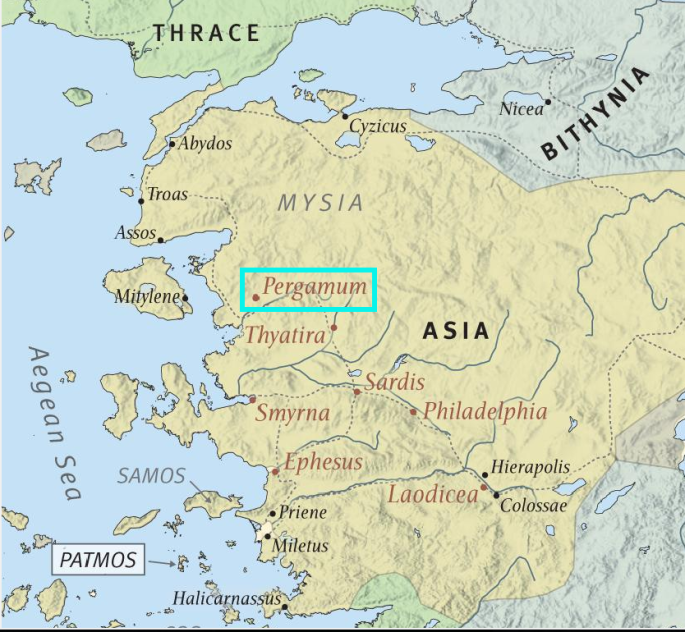 Preaching against worldliness may be passé in the modern church, but with Christ it has never gone out of style. When He introduces Himself to the church at Pergamum, Jesus describes Himself as “He which hath the sharp sword with two edges.” He was not giving them a warm welcome. He was reminding them that He is Judge and Executioner, and that His judgment begins in His own house. Pergamum was a worldly church and Jesus was having no part of it because “the friendship of the world is enmity with God” (see Ephesians 2:16).

As He has done with the previous two churches, He begins with praise:

“I know thy works, and where thou dwellest, even where Satan’s seat is: and thou holdest fast my name, and hast not denied my faith, even in those days wherein Antipas was my faithful martyr, who was slain among you, where Satan dwelleth” (Revelation 2:13).

Not only does He know their works, He is also well aware of where they are. The church at Pergamum was surrounded by paganism and all of its allurements. It also faced severe persecution at the hands of emperor worshipers. So, Jesus understood they were on a difficult field, but He acknowledges this as a fact, not an excuse. Our tendency is to yield – if not wholesale, at least by degree – to the allurements of the world. We justify it by telling ourselves we are living in difficult times. Living for Jesus 24/7 is hard. A little indulgence is OK. It’s like when we go on a diet and follow it for a whole week and then reward ourselves with a carton of ice cream. It’s not OK. It’s not justifiable. Dedication to Christ is all or nothing.

To their praise, the people of Pergamum were holding fast to the name of Christ. One of their number, Antipas, perhaps their pastor, was even martyred for the faith. But they were in compromise. Perhaps the martyrdom of Antipas shook them so badly they thought: “Why not give a little quarter to the enemy? Maybe we should start a dialog, find some common ground.” Jesus would not hear of it. Friendship with the world is still enmity with God. Where the church of Ephesus rejected the deeds of the Nicolaitans outright, the believers at Pergamum had them in their church, not to evangelize them but to fellowship with them. Just like He said to the Ephesians, He tells this group of believers that doctrine of the Nicolaitans is a thing He hates (v. 15). As noted before, Jesus is careful to point out that He hates the doctrine of the Nicolaitans, not the Nicolaitans themselves. We are to hate the sin, not the sinner. Pergamum was loving the sinner and not confronting the sin. That is self-love over love of Christ and over love of others.

His warning to the church at Pergamum is clear: “Repent; or else I will come unto thee quickly, and will fight against them with the sword of my mouth” (2:16). It is interesting that the Lord says “I will fight against them’ and not “I will fight against you.” You are either for God or against Him. Compromise with the world is not just dangerous for believers. It’s also dangerous for unbelievers because it can give them a false sense of security. It can make an unbeliever think he is heaven bound when he is not. The remedy to this problem is simple: God’s Word. It is a tool of judgment and correction. Its very nature is to right wrongs. The believers at Pergamum were compromising the truth according to their own wisdom. Jesus was reminding them to return to the Scriptures to get their focus and their doctrine realigned.

In His closing promise, Jesus points to the exclusivity of the Christian faith. Whosever will can come, but it must be on God’s terms. Yes, I can come to the Savior just as I am, but I need to understand that He will never leave never leave me where He finds me. Jesus’ intent is to change me into His image. To those who come to Him in humility and repentance, He promises the hidden manna: Jesus Christ, the Bread of Life and all the blessings that come from fellowship with Him; and a new name – a new identity in Christ. In Roman custom, when an athlete was victorious, he received a white stone that gained him access to the victors’ banquet. For believers, being in Christ gains us access to the banquet in heaven. When John uses the word new it does not mean new relative to time, as in new to me. It means qualitatively new, as in brand new. When Paul wrote to the Corinthians who were compromising morally, he listed some of the sins they engaged in before they became believers, but after that list he says: “And such were some of you, but ye are washed, but ye are sanctified, but ye are justified in the name of the Lord Jesus, and by the Spirit of our God” (1 Corinthians 6:11). In other words, he was saying that as believers we are qualitatively new creatures in Christ. Why would we want to exchange that by going back into fellowship with the world?

Follow Grace in Waves on WordPress.com
Join 220 other followers